Water Rats part 2.5: The Boy on the Green Kayak

Dena woke up sleepy. The sun was well up at this stage. Likely half the day lost now. She extracted herself from her 'nest' , a bivy-type setup, consisting of a tarp with a blanket inside, and a sleeping bag inside of that. Her kayak was beside her still. There was a boy standing a few feet away. She pulled on her boots. He had a green kayak. She poked in one of her bags. There were still some sweet biscuits there. It was a very nice green kayak.

'Hello yourself. Who're you?'

'Dena. Where are you going?'

'Down into Limerick. You?'

'A guy setting out on his own for the first.'

'Won't. Refuse to work for free for my Dad's woman.'

'Fair. I'm a Water Rat. I'll point you where to meet some more.' She looked at Adam's kayak. 'Nice rig. All yours?'

'Left behind by my Mum. I'm not very good with it yet.'

'You'll learn. Come on, let's get downriver. You know anything about the area?'

'I know that this takes you to the Shannon, the Shannon takes you to Limerick and the sea, you can go up by Ardnacrushna to Lough Derg and away to Dublin and Derry. I've been in Limerick once since things crashed.'

'Come on.' Dena had been packing throughout the conversation, and had got a bite of breakfast in. Her Kayak was a sit on item, with some improvised dry bags holding her worldly goods.

They skidded the kayaks down into the river and clambered aboard. Adam's kayak looked to be a really high grade piece of kit.

They paddled on in silence for a little while, with some mutual suspicion. Dena watched Adam as closely as she could. That was quite hard, as he had resolved to follow her closely from behind. He seemed to keep pace quite well, although he definitely had the edge in equipment. 20 minutes took them to the end of the Mulkear river, and they saw barely a soul. There were a few milk cattle in the fields either side, and one old man patching a fence. There was one kid sitting on the remnants of a bridge they paddled under. This caused much waving from all parties present.

'This is us coming out onto the Shannon now. There's a wee current to help us from here on.'

'Right. How long have you been at this?'

'Since about March, but I hung around Water Rats for about a year before that. Managed to save enough to buy this' She gestured to her yellow kayak. 'And left home. It's been great so far. Apparently winters are very hard on the water though. They're talking about finding somewhere suitable to set up camp for the winter.'

'A few of the older guys, and nobody knows yet. Depends on how the last meet of the year goes.'

'I've heard about the meets, it's like a weekend of camping and messing around for yous, aye?'

'Yes. They also decide things like where to set up for winter, if anyone's out of line and should be pushed away, and if there's any 'rules' that need imposed.'

'They're talking about some of the Shannon estuary islands. Might wind up on Lough Derg. Nobodies sure yet.'

'Where do they tend to hang around in Limerick?'

'Stash your questions for a bit.' They went on downriver, passing through the mostly dead area that was the University of Limerick. Once past it, there were a couple of boats around, the big flat bottomed cots that had seen a revival due to their utility. They were all coming out the end of a river on the North bank.

'There's a bit of a project on to clear the Plassey canal. It's good for boys who need a days work, they pay OK.'

'Yeah, I was offered to work on it, but it's too far from home. How far can you paddle on it now?'

'A good bit I think. Up at the top they're putting together a bit of a weir, so it can help water levels. It's not all closed yet, as they want it shallow for dredging.'

They passed one of the cots, which was heavily laden with the product of the dredging, smelly mud. It would be sought after in town for vegetable gardens though. The boatman waved, and they waved back. He'd be going down the Park canal into the very centre of town. They soon passed the end of it too, and were passing along the Shannon fields. There were two pairs of fishing boats up here with their snap nets out. Dena called out to see if they had any luck. They both seemed to be doing alright.

Then they were going under Athalunkard bridge.

'There's a weir ahead, we're going down over it. You don't want to go into the millrace to the left, you'll get stuck.' Adam nodded and followed. 'Just go straight and you ought to be OK' They passed by the big old grammar school and the housing estate at Shannon Banks, and hit the weir.

Adam was surprised to find it was entirely OK, as it was a mere bump down to the slightly lower water level. The water was a bit faster though, and he found himself in slight disagreement with the current as to where he wanted to go. Dena was pulling to the right, round to the far side of one of those islands that were to be found on the Shannon. They managed to escape the current.

And Adam speculated that this island was occupied by Water Rats, a pure guess based on the flag he saw flying from a pole, and the boats pulled up on the shore. 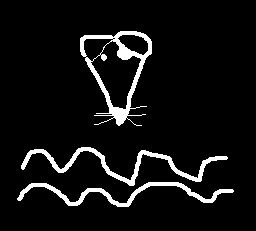