Adam awoke in his tent to the early morning light. He was quite sore. In fact, very sore. The normal aches of a days work had attacked, aided by bruises from the grappling with his father, and compounded by sleeping on the ground. What would today hold? He felt in the pocket of his bag for his alarm clock, which showed 7:30 on it.

Better get up and get moving then. He needed to get down to Limerick at least today. He was just on the above Annacotty, pulled up on the Barringstonsbridge side of the motorway bridge. He'd staggered up the bank in the last of the light, popped up his tent, and went to sleep. He'd found himself consciously trying to sleep in these recent years, and now it came fairly easily. Just slow your breathing and think of nothing, ignore the shouting and crying downstairs, it's in a different world.

He squirmed out the sleeping bag, a three seasons one, and got it packed up in its bag, which went in a dry bag. He pulled on his trousers and socks, as well as a thin hoody. He munched on one of Mrs Mullan's soda farls, and packed up the tent, then loaded it all onto the kayak.

He surveyed the campsite. There wasn't any trace left, bar some grass being trampled, because he'd nothing to leave. He was in for a much simpler life now, maybe, with fewer things to clutter it. Then it was time to get back on the water. There was a weir in Annacotty to contend with, and he was quite sure it would be a busy enough day. Better get started.

When he floated the kayak, he had to get his feet wet in order to go out far enough to float properly. Not the best start to the day, but sure, he'd get by. Then he set out paddling, with what was probably rather poor technique, watching for shallows which would beach him. There were plenty, which he had to lever himself over to get along.

It took a while to reach Annacotty, especially when he had to get out and pull the kayak round an abandoned weir, and over some shallows. Things started to get loose and so he pulled up on the bank and tie them down again. But he got on down to Annacotty weir anyway. passing the back of the student village, now almost completely abandoned. Suburbs in general were bad places to live nowadays, but the student village was nearly hostile to life, being so far from any employment. A few hung on, mostly those who'd been kicked out of everywhere else. Adam didn't want to deal with them, but he needed to portage past the weir, and maybe the shallows after it.

When he reached the weir, he saw the big old mill building, converted to a bar a long time ago, with the remnants of an attempt to make a local hydropower scheme in the mill race. Some professor had tried to make a setup to generate local power, so they weren't reliant on the Ardnacrushna Grid, and didn't have to pay dues for it.

She was sorely mistaken. Ardnacrushna Grid dues were to be paid regardless of whether they provided you power or you even wanted it. She'd suffered horribly at the hands of the thugs, and had run off into the Tipperary hills. Apparently they built a small hydro plant up there.

Ardnacrushna Grid was the name by which the local tyranny was known. Somehow, Ardnacrushna hydroelectric station escaped the systematic destruction of all infrastructure. The ESB workers had kept working hard to keep as many lights on as possible from it. In fact, they kept working so hard, that they didn't notice until too late that the mob had taken the reins, and were collecting tribute for the electricity from the people, whether those particular people actually got electricity or not. They also controlled the harbour in Limerick, planting themselves right on the corner of trade on the West coast. The average person was barely aware of them, unless they were somehow unable to pay, which normally ended in a beating and prompt payment of a much larger amount.

They'd even started their own currency, taking over from the anarchy of a thousand local currency systems. They simply overstamped the existing currency with their mark. Overall, everything looked to the outside world like it was a corporation that was running a lot of infrastructure to the benefit of everyone. Hugh Delany even gave himself the title of CEO, and called his thugs 'agents'.

Regardless of the local condition of things, Adam still needed to portage downstream quite a bit. It was only coming up on 9 o'clock now, as he pulled the kayak up on the grass bank, on the opposite side to the mill. He sat a moment on the bank, and spotted a wheel sticking out of some scrubby green bushes. He went over and investigated, and found a crude kayak trolley made out of a pair of lawnmower wheels, with a poly pocket attached firmly to the wood that made the axle.

Downriver: Go down the East Bank till just before the old Annacotty Motors, then go through the gate with the top of the post painted red.

Upriver: Go to road, turn right, go up till you reach the weir

Put this back in the bushes when done 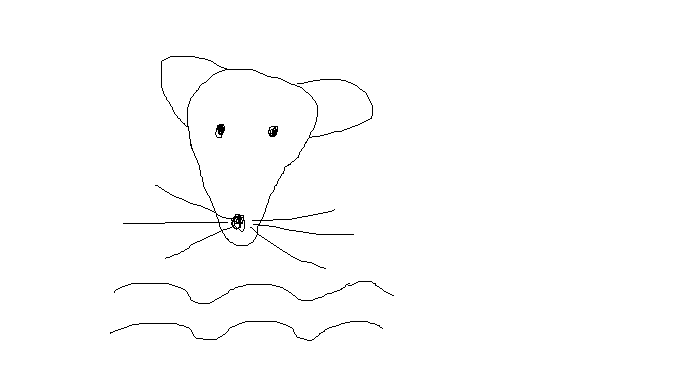 In the bottom right hand corner, there was a basic symbol of the Water Rats, a rat's head over 2 wiggly lines. The trolley even had a length of rope attached to it so you could strap onto it tightly.

He rested a few moments longer, then got to work tying onto the trolley. Despite being crude, it was better than his prior experience of using a dolly on casters. He went off, quite happy to have the opportunity to stretch his legs, along the path, which led to a road along the bank. It was a fairly nondescript Irish scene, in what was now a very quiet area. The kayak was as heavy as it had been last time, but at least he didn't have any pressure on him. He made a conscious decision not to think about the events of the previous day, and walked on.

He met a very few people on the road, but none of them even looked his way, and he was happy enough with the lack of attention. Then he spotted the painted gatepost, and turned into what was the bottom of someone's garden. There was a fairly clear path down to the water's edge, which he went on down.

To where he met his first Water Rat.